More Canadians have been arrested. So far a Canadian girl has been identified. Murky situation. It sounds like rounds ups are going on in China.
Top

The most important segment in John's post is of Bannon's observations. Why do you think Steve left America? Are you, each of you, sitting on your knuckles waiting for a savior?
DC is populated with NWO and cheap labor TRAITORS. We are so abysmally stupid as to fund our own demise. Year after year we listen and believe meaningless words of comfort and lies designed to create apathetic acceptance of our own eventual servitude.
Anyone who remembers civilized America is laid low by even casual overview of today's fragmented population.
This Christmas the days are merry and bright with plastic and gawdy baubles of the generic non-Christian ignoring/denial of the Christ child's birth. China is but one threat. We are already occupied with more invaders milling the unguarded open border. Face it kids, when the wrapping paper lies crumpled and emotional high dissipated, reality remains. The enemy is us.
Top

I do have to wonder if the "data snatchers" from China (and elsewhere) aren't in cahoots (sharing/co-oping) with the "Deep State" in the US and other parts of the world?

It would be a great story: The "Worldwide One Party State" (Association of Elites) are doing their best to guarantee that data to manipulate the "lowly people" is available to whomever is in the best position, at any particular time, to squash any "anti-one-party-state" group by targeting it's "key players".

The various local elites are vying with each other for a "piece of the action", which SEEMS to appear to be the various countries preparing for a massive war.

They could, in fact, STILL be preparing for a "superficial war", and actually HAVE that kind of war, while they continue to cooperate, as they know that they will survive, along with the requisite number of "slaves" to operate their local post-war economies.

The apparent "fearlessness" of the "elites" throughout the world makes me rather suspicious that something "beneath the surface" may be going on.

But then again,.. my overly fertile imagination is probably in novelist mode, yet again, so.....

I'm not a believer in large scale "Illuminati"-esque theories, because they tend to violate the "Lowering IQ of Large Groups" principle ("large groups are stupid"), and elites tend to plateau in their desire for "yet more power" once their comfort levels reach a sufficient height,..

..but to make the story more interesting, it may be that some "unusual player/force" has entered the scene, and is "motivating" the elite groups to compete with each other for a better spot in "court".

I can't believe that actor is "the Chinese", because it's too obvious, and too good a red herring.

Perhaps the "odd" player is that group of elites that seems most "subdued and innocuous but quietly unafraid" is our "kingmaker/powerbroker/organizer"?

..or maybe it's just aliens?

In any case, I'm now on the lookout for strangely unafraid "really rich folks". Aloha gangies!

Darn, you beat me to it! All the way through your piece, I was thinking, " aliens, aliens, ALIENS DAMMIT!"
Top

shoshin wrote:Darn, you beat me to it! All the way through your piece, I was thinking, " aliens, aliens, ALIENS DAMMIT!" 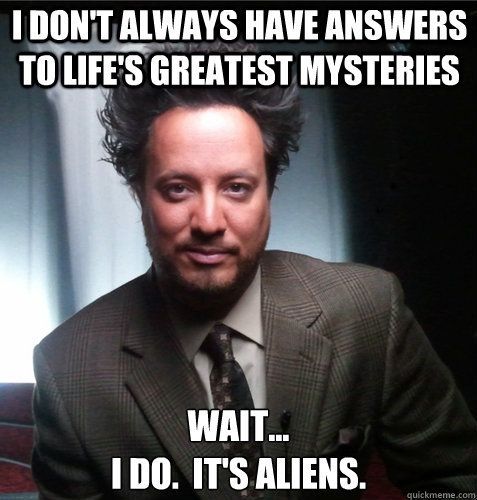