Well, gold is up 2% but the stock market is not crashing yet. Maybe next month.
Top

I think it could still crash this month. But you bring up a point I hadn't thought of. In 1929, the stock market reached a temporary low on November 13. That really could be thought of as the end of the crash. I think it's possible that a scary CPI number next month could result in a big flush down to end the first leg of the bear market. That would also be similar to the year 2000 where the market (Nasdaq in particular) was already falling before the April CPI number came out and made a temporary low shortly after the number. 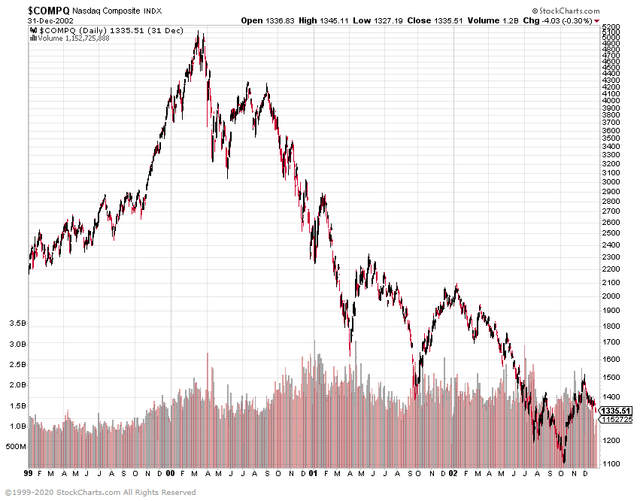 November 10 and December 10 are the next two CPIs.
SHARKS (crossed out) MONGEESE (sic) WITH FRICKIN' LASER BEAMS ATTACHED TO THEIR HEADS
Top

Yes, the question is, what will be the reason that people don't buy the dips any longer?
Top

People will still buy the dips, but the market will change to a pattern of lower lows and lower highs.
While the periphery breaks down rather slowly at first, the capital cities of the hegemon should collapse suddenly and violently.
Top

People will still buy the dips, but the market will change to a pattern of lower lows and lower highs.

Fair enough, they won't really be buying the dips, then.
Top

People will still buy the dips, but the market will change to a pattern of lower lows and lower highs.

Fair enough, they won't really be buying the dips, then.

Assuming Bitcoin doesn't make a new all time high, by your definition, did you really buy the dip in Bitcoin? I would say you did. From what I'm reading here, my interpretation is you would say you didn't.
While the periphery breaks down rather slowly at first, the capital cities of the hegemon should collapse suddenly and violently.
Top

Can you give me an example of some of them.

One trade I do I call a "conjunction trade" because it requires two simul-
taneous conditions for a buy signal: the tick going below -400 and the
tiki, which is a tick indicator based on the thirty Dow Jones stocks, going
below —22.1 give this trade only twenty-one minutes to work. Whenever
I get a signal, I set my egg timer. [He winds up the egg timer on his desk,
which ticks, audibly as it unwinds during the ensuing conversation.] I
picture the egg timer as a bomb, and I have to be out of the position
before it goes off. I will liquidate the position when any of the following
three things happen: I get my 3-point profit objective, my 6-point
stop-loss is hit, or the twenty-one-minute time limit is running out.

Because of the trading diaries that I keep. I've recorded these trades
time and time and time again. The best trades work the quickest. I
found that you should make three points within the first ten minutes.
After ten minutes, the trade could still work, but the odds are much
lower. Once you get to fifteen minutes, the odds are so reduced that
all you want to do is get out the best you can. The more time that goes
by, the lower the probability that the objective will be reached.

I note that you are using a risk point that is twice as large as your
objective. That's fairly unorthodox.

It's all a matter of probabilities. I like high-probability trades. This
trade, as many of the other trades I do, works approximately seven out
of eight times on average. If I make 3 points seven times and lose 6
points one time, I still come out ahead 15 points across eight trades.
Another trade I do involves watching the ratio between the S&P
and Nasdaq. I use this information to decide which market I will
trade if I get a signal. If I get a buy signal on one of my other indicators,
I will buy the index that is relatively stronger that day. And if I get
a sell signal, I will sell the index that is relatively weaker.

What would be an example of a signal?

I have a trade that I called a "tick buy," which means that if the tick
gets to -1000, I will buy because the market will tend to snap back
after that point.

In other words, if you get a tick buy signal, which implies a
sharply declining market, you'll buy the index—S&P or Nasdaq—
that is less weak.

https://dl.fxf1.com/files/books/english ... izards.pdf
While the periphery breaks down rather slowly at first, the capital cities of the hegemon should collapse suddenly and violently.
Top

Because they have to buy food or pay rent.
As we noted in July and earlier CALPERS will trigger the carnage and both sides damn well know it.

March 07, 2018 08:27 AM
Wait until 2020-21 when CalPers can no longer hide and will take out the city and state budgets.
Until then nothing will change unless they are arrested and tried in DC.

We also noted the credentials of the manager. It should be noted yea smart people in impossibly corrupted systems
and even the communists moved on it to late but they did. Everyone knows.

The thread was and is Pharmakeia here as credited in Revelation 18 as the means by which all the ethnos/races are deceived also.
We can leave it at poison paper. The paper tigers are making you pay for inflated assets since they can. We discussed intrinsic
value to nominal values. The crack up boom is a feature we know well here called derivatives.

The move gov.gruesome made was to stall for time with lithium tech as they pick axe it in out the Afgan slave pits
until the aluminum ion tech rolls out la8ter. Xiden is another insane puppet on the Chin payroll.
Since 1871 the Senate are relegated serfs.
I find humor they think the market reflects the economy.
Top

"There are only two genders. There. Please unfollow me." Mike
https://www.zerohedge.com/political/mic ... itter-rant
As we know your crayon chewers and paste eaters have the Lobby of four or more on just one topic alone to the
venal demesheviks and body farm swamp people.
As H knows they are just paper pillaging and it will crash as the corupt filth will overwhelm the commons as poison.

As for education in the public morass hire independent tutors to repair the damages from public education.
As we warned they are after the raw material to mangle it. Thu Apr 18, 2013 7:36 am
Top
Post Reply
25880 posts

Users browsing this forum: No registered users and 19 guests