President Pervez Musharraf kept Pakistan out of war throughout the
2000s, but since he's been forced to step down, the country has
apparently been deteriorating. Where is Pakistan going?

Probably back to the stone age as quoted by Dick Cheney.
Top

Here is a little foretaste. Just change the last digit to a 9, or switch the last two digits.
http://www.alternatehistory.com/discuss ... hp?t=42487
SHARKS (crossed out) MONGEESE (sic) WITH FRICKIN' LASER BEAMS ATTACHED TO THEIR HEADS
Top

John wrote:President Pervez Musharraf kept Pakistan out of war throughout the
2000s, but since he's been forced to step down, the country has
apparently been deteriorating. Where is Pakistan going?
Forum: http://www.GenerationalDynamics.com/forum

Where does the heat in a cauldron go?

Especially when the truck bombing which took place yesterday appears to be provoking the whole world. An international hotel business is once again put on violent notice. Muslim patrons who are there (consorting with those who are from the outside and thus supporting them) to break the fast from Ramadan are torn to shreds. Foreign visitors who stay there because they feel safe and can be treated in the way to which they are accustomed are similarly incinerated. And it all happens hours after the newly elected president Asif Ali Zadari offered the possibility of reconciliaton - well that all went up in smoke also. AND the bigger theater is the recent bombing of the U.S. Embassy in Yemeni.

The message is clear. Death and destruction in the form of terrorism will continue until total capitulation takes place.

P.S. John, thanks for starting the forum. I hope it takes off in interesting directions.
Top

We know where it's going. Let's just hope we aren't the ones providing them the handbasket.
Top

Pakistan continued its path to the "regeneracy" today, following the
devastating attack in Islamabad on Saturday.

Fighting is continuing in Bajaur, in the northern part of
the tribal areas (FATA), and this is escalating and turning into a
critical battle.

The government is now in the hands of a Shia based party (Benazir
Bhutto's PPP), and the Sunni groups -- the Taliban, the Pashtuns, and
the Punjabis -- are not happy about it. The terrorists are
succeeding in splitting the country along ethnic and religious lines.

As Pakistan heads for war with India, the Shia are aligned with the
Hindus, and are opposed by the Sunni groups.

And that doesn't even mention the Americans, who are being more
aggressive in going after terrorists in the FATA, but are being shot
at by Pakistan's army, to satisfy the fury of Pakistanis who don't
want Americans on Pakistan's soil.

I've renamed this thread to "Afghanistan, Pakistan and India" from
"Pakistan," even though Pakistan is still the main focus, at least for
now.

Many people (including me) have said that Pakistan is the most
dangerous country in the world.

I've written dozens of articles on Pakistan, including the following
in 2008:

** 'The deal is done' for Pakistan's President Musharraf to resign
** http://www.generationaldynamics.com/cgi ... b#e080815b

** Pakistan is paralyzed as Tehrik-e-Taliban advances in NorthWest
** http://www.generationaldynamics.com/cgi ... 29#e080629


The major ethnic groups that Pakistan shares with India and
Afghanistan are shown by this map: 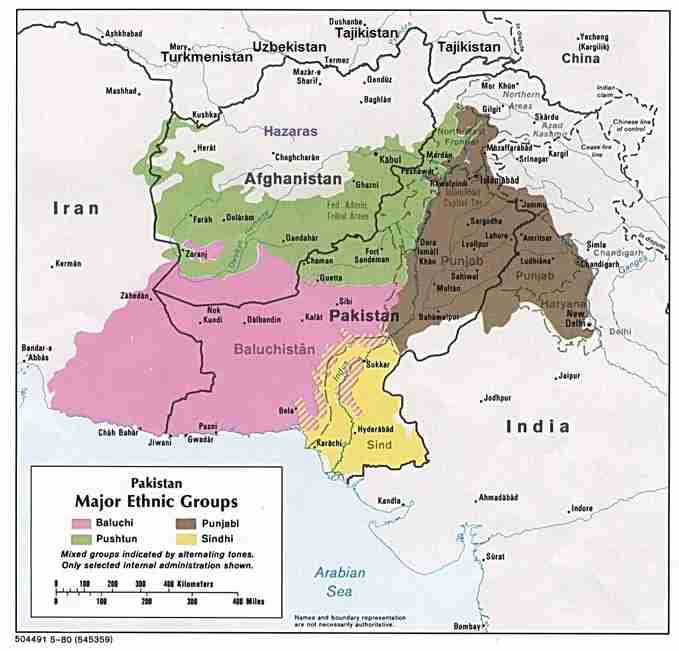 The situation in Pakistan is based on deeply historic ethnic
differences. Hindus, Persians and other Shia Muslims have been
allied against Sunni Muslim Arabs, Pashtuns and Punjabis for
centuries, going back as far as the seminal battles that caused the
Shia/Sunni split in the 680s. The last major crisis war was the the
massively genocidal war that followed Partition, the 1947 division of
the Indian subcontinent into India and Pakistan.

Few people realize that former Pakistan president Pervez Musharraf was
a Muslim born just outside of Delhi. He was a survivor of the bloody
1947 war, and he created a remarkable détente with India's Prime
Minister Manmohan Singh that kept the region at peace so far in the
2000s. In particular, Musharraf was able to keep the army's loyalty,
and keep peace among the Sunni Pashtuns, Shia Muslim Sindhis (led by
Benazir Bhutto) and the conservative Muslim Punjabis (led by Nawaz
Sharif, whom Musharraf overthrew in 1999).

With Musharraf gone, the violence between the Sunnis and Hindus in
Kashmir is increasing; the radical Sunni Pashtuns (Taliban) are
staging ever more violent terrorist bombings throughout Pakistan; and
the new President, Shia Muslim Asif Ali Zardari, Benazir Bhutto's
widower, is in the younger post-Partition generation, and is forced to
manage the differences between his Shia base and the increasingly
confrontational Taliban and al-Qaeda.

Terrorist bombings have been increasing in India as well. In some
cases the Islamist extremists are blamed, but a new phenomenon has
been springing up: terrorist Hindu groups in the form of anti-Muslim
"Hindutva" groups bent on violent revenge against Muslims. A
Hindutva group is considered responsible for a major terrorist
bombing in India a month ago.

For many Americans, the major focus for this region is the war in
Afghanistan.

Ironically, Afghanistan is currently in the last years of a
generational Recovery era (first turning), its last crisis war having
been the civil war in the early 1990s. Thus, there shouldn't be any
big problem for the Nato and American forces in Afghanistan.

But there is a big problem -- the tribal area between Afghanistan and
Pakistan. Although the Taliban may be in a first turning, the tribal
area is drawing thousands of al-Qaeda fighters from Arabia and
central Asia, regions that are in a full-fledge generational Crisis
era. This makes the Pakistan war extremely dangerous, especially
near the Pakistan border. 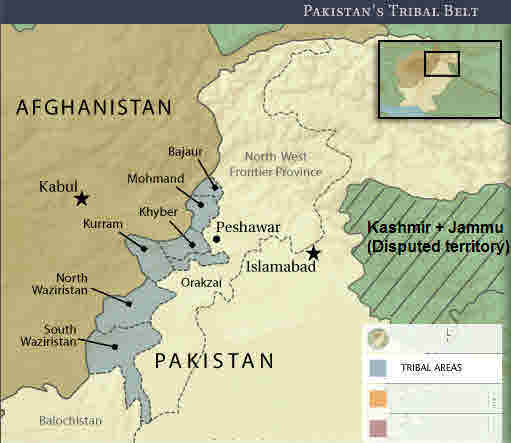 One of the major diplomatic battles going on today is the American
bombing of suspected Taliban and al-Qaeda sites in the tribal
regions. The worldwide financial crisis is only exacerbating the situation.

From a web site reader:


> It's my firm belief that Asif Ali Jardari is the only person
> behind the killing of Benazir Bhutto. As she has more wits than
> him and in her life he can never be able to get ahead of her as he
> is very ambitious person and once he saw that this is the right
> time cash in on he made a dent on hot iron. Its also well known
> that he is loved by her and she trusted him so he is the only
> person who can be only person behind her killing. He is not only a
> killer but but betrayed her beloved one. People of Pakistan will
> never forgive him.

This is definitely a minority view. Benazir Bhutto was from a
leading family of Shia Muslims, and I believe that few people doubt
that the suicide bombing that killed her was at the hands of Sunni
Muslim Pashtuns (Taliban).

As I dig into the "Hindutva" phenomenon -- Hindu terrorism against
Muslims in India -- it turns out that the generational connection is
to terrorist groups that were responsible for the assassination of
Mahatma Gandhi in 1948.

Gandhi is considered the founder of India, while Muhammad Ali Jinnah
is the founder of Pakistan. The two men had met during WW II to plan
for the coexistence of the two nations when the time was right.
Hindu extremists were infuriated that Gandhi was even meeting with
Jinnah.

Of course, the planning of Gandhi and Jinnah didn't produce the
desired results. After Britain allowed Partition to go forward in
1947 (partitioning the Indian subcontinent into India and Pakistan),
there was a huge, bloody, genocidal war between Hindus and Muslims.
Gandhi himself was assassinated in 1948.

Now, 60 years later, the two sides are appearing as terrorist groups.
Muslim Jihadists have been recognized for years, and various suicide
bombings in India were always assumed to be caused by various
Jihadist groups.

There was a suicide bombing in Malegaon in India on September 29,
2008, and Muslim Jihadists were immediately suspected. However,
Indians are shocked to learn that evidence is pointing to a
widespread terror network, a Hindu Hindutva group that seeks revenge
against Muslims. Even worse, this terrorist group has links to
India's major opposition party, the Hindu nationalist Bharatiya Janata
Party (BJP). This party also has suspected links to Hindu violence in
Kashmir, as I wrote about three months ago.

From the point of view of Generational Dynamics, a re-fighting of the
massively genocidal war following the 1947 Partition is coming with
absolute certainty. Both India and Pakistan are becoming
increasingly polarized between moderate and extremist groups, and
this polarization extends to Afghanistan, where Nato and American
forces are slowly but surely being drawn deeper into the conflict.

Users browsing this forum: No registered users and 3 guests