John, American troops are being transferred from Syria into Iraq, so Trump has had to reverse his decision to totally withdraw the troops. He's simply moving them from one place to another place a few miles away. Also, Trump is clearly betraying the Kurds, who lost thousands of people fighting ISIS on America's behalf. The US will regret this later.

all roads lead to Putin
Top

Did you read my article on Turkey's invasion of Syria?

In particular, did you read the part about Russia gaining
influence in the Mideast?

The Russian media has been going wild saying how America abandoned their posts and the Russia have moved in and taken over. They are smirking and laughing like they defeated America in battle.

The one time Russian troops did clash with Americans in Syria they got ripped to pieces. The Russians had hundreds of their soldiers killed and the Americans didn't even get wounded.

It's also interesting how the Russian media gloated about finding fresh Krispy Kreme dounts, gluten free noodles, Coke and Pepsi, and a variety of expensive food products in the abandoned base. They are trying to portray American troops as pansies. It seems to be backfiring. Many in Russia are impressed at how well taken care of US troops are and how well equipped the small base is. (Tents with A/C, video game consoles, comfortable bedding, etc.) American soldiers have top notch equipment, vehicles, kit, and food, and now everyone knows it.

The Russians are a bunch petty and vindictive thug losers ruled by a deceitful goat.
Top

David Horn wrote:> I know you have strongly held views, but it's impossible to
> believe that anyone has been as divisive as DJT. FDR had some
> serious detractors, but Trump is actually building a potent
> opposition that may simply be unwilling to accept Trump 2.0, of
> that occurs. He's already a minority POTUS, and there is little
> doubt that, if reelected, he will be even moreso in 2021. That
> will be the third minority election in this century -- fully 50%!
> I can't see that being opposed quietly.

Divisiveness isn't caused by the president. It's caused by
the generational era.

FDR was blamed for perpetuating the Great Depression, and for
implementing a bunch of programs that a lot of people hated. FDR
seriously split the country because of his proposal to pack the
Supreme Court, something Democrats are talking about again. Like
Trump, FDR was divisive because many people loved him, and many people
hated him.

In the current era, Democrats have been extremely divisive. They
hated Bush, and even got a movie made in 2006, Death of a President,
that portrayed the assassination of Bush. Obama's presidency was
supposed to heal racism, but instead he used every opportunity he
could to stoke racial hatred. The left constantly threatened the Tea
Partiers, calling them teabaggers, and close Obama advisor James Hoffa
frequently threatened Tea Partiers with violence.

The Democrats have been planning impeachment literally from the moment
Trump took office. They've spent three years humiliating themselves
trying to bring about a political lynching of Trump with one phony
charge after another.

Now Democrats are now using a King James/King Charles style Star
Chamber. The Star Chamber was abolished by the bloody English Civil
War, but the Democrats are reviving it, to lynch Trump by any means
possible.

Speaking of divisiveness, as cynical as I am, I was still surprised
that Democrats have shown such enormous contempt for blacks having the
lowest unemployment rate in history. But actually, if you look at
history, it makes a lot of sense. Democrats in the Civil War wanted
blacks to remain in slavery, then they formed the KKK to lynch blacks
for over a century, so now they're still contemptuous of blacks
getting jobs, since unemployment keeps blacks in slavery, which is
where the Democrats have wanted them for 150 years. It's pretty
sickening.

So I know that you have strongly held views, but Trump is not
particularly divisive. It's the Democrats who would say that even the
most benign Trump policies are divisive, even something like lowering
unemployment rate for blacks.

But the other thing to notice is that this kind of divisiveness goes
well beyond America. In this generational crisis era, xenophobia,
nationalism, and tribalism have been growing all over the world,
particularly as worldwide economic growth has been slowing. There are
bitterly divisive battles going on in Britain, Israel, Italy, and
Hungary in Europe. There are conflicts today in many places,
including Syria-Idlib, Iraq, Afghanistan, Mexico, Somalia, Nigeria,
Sudan, South Sudan, Libya, Pakistan, Egypt, Democratic Republic of the
Congo, Yemen, Ethiopia, Ukraine. There are riots in Hong Kong,
Lebanon, Chile, Catalonia, and elsewhere. The Brexit debate is
particularly hilarious.

So it isn't Trump that's causing divisiveness. It's the generational
Crisis era that causes economic stagnation, xenophobia, nationalism,
and tribalism, and those things cause divisiveness. This is all part
of "The Gathering Storm" that's leading to WW III, with or without
Trump.
Top

Erdogan and Putin shake hands in Sochi on Tuesday

Guest wrote:> The Russian media has been going wild saying how America abandoned
> their posts and the Russia have moved in and taken over. They are
> smirking and laughing like they defeated America in battle.

> The one time Russian troops did clash with Americans in Syria they
> got ripped to pieces. The Russians had hundreds of their soldiers
> killed and the Americans didn't even get wounded.

> It's also interesting how the Russian media gloated about finding
> fresh Krispy Kreme dounts, gluten free noodles, Coke and Pepsi,
> and a variety of expensive food products in the abandoned
> base. They are trying to portray American troops as pansies. It
> seems to be backfiring. Many in Russia are impressed at how well
> taken care of US troops are and how well equipped the small base
> is. (Tents with A/C, video game consoles, comfortable bedding,
> etc.) American soldiers have top notch equipment, vehicles, kit,
> and food, and now everyone knows it.

> The Russians are a bunch petty and vindictive thug losers ruled by
> a deceitful goat.

Russia's president Vladimir Putin and Turkey's president Recep Tayip
Erdogan, met in Sochi on Tuesday, and after six hours hammered out an
agreement setting up a buffer zone in northern Syria, 120 km long and
32 km deep.

Both Turkey and Russia will patrol the buffer zone, and require what
Erdogan calls "YPG terrorists," referring to the Kurdish People's
Protection Units (YPG), which is thought to be allied with the
terrorist Kurdistan Workers' Party (PKK). The PKK have conducted
nurmerous bombings and terrorist acts within Turkey, and have
conducted a 30-year insurgency.

Turkey's incursion into Syria will not go any further. The remaining
parts of the buffer zone will be patrolled by Russian military police
and Syrian border patrols.

One thing that isn't clear to me is what the Arabs in the Syrian
National Army (SNA) that have been cooperating with Turkey are going
to do. It's these Arabs who have been massacring the Kurds, and now
they'll have to be brought under control by either Turkey or Russia or
Syria or all of them.

The ceasefire will be extended another 150 hours, to give the YPG time
to evacuate the region.

Erdogan has said that, in the future, 1-2 million Syrian refugees,
among the 3.5 million that Turkey has been hosting, will be moved into
the buffer zone.

Some American politicians are expressing alarm over the rise in
influence of Russia. This is fine with me, as I explained in my
article a couple of days ago. China is our enemy, not Russia. And if
Russia is taking over the job of protecting the Kurds from the Turks,
then America has one less headache and Russia has one more.

There are rumors that China is going to replace Carrie Lam as the chief executive of Hong Kong, but China is denying them for now.
Top

I just watched Trump's victory speech on the Turkey-Syria-Kurd
situation, and have a couple of quick thoughts.

Trump said that the ceasefire would be "permanent." When I heard
this, I wondered, as I often do, what comes over almost all
politicians to think that they're so brilliant that they can make
impossible things happen. (This is the discredited "Great Man Theory
of History.")

However, I personally share the view that this outcome was much better
than if Trump had sent in thousands of American troops to stop
Turkey's invasion, as many, many people said they wanted. "Countless
Kurdish lives have been saved, without the spilling of any American
blood." And: "Let someone else fight over this long bloodstained
sand."

Trump did not say anything about the Syrian and Russian troops in the
region. In fact, he never once uttered the word "Russia." This will
continue to be a controversial issue.

Trump looked very tired, much more tired than I can recall ever
seeing him.
Top 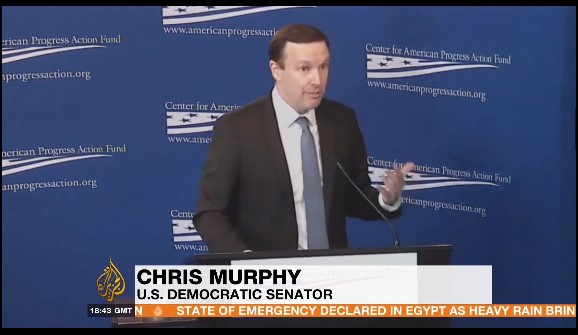 Chris Murphy speaking to the Center for American Progress
(al-Jazeera)

I've often said that the stupidest person on the scene today is
Alexandria Ocasio-Cortez (AOC), who makes one moronic, pathetic
statement after another.

Just to prove that I'm not sexist, I've now found someone who is even
stupider than AOC. AOC is just a young girl, new in Congress, so has
an excuse for being stupid.

But Connecticut Senator Chris Murphy is 46 years old, was in the House
from 2007-13, and has been in the Senate since 2013 and he's a member
of the Senate Foreign Affairs Committee.

So I was watching al-Jazeera, and they showed a brief video of Murphy
speaking to the Center for American Progress, where he's apparently
thought to be an expert.

Here's what he said in his speech:

"Elsewhere in the Middle East, things are falling
apart fast, due mostly to the Trump administration's
incompetence. It started with this nonsensical fracture of
relations between Saudi Arabia and another key US ally Qatar.

It was the kind of disruption that frankly would normally be
papered over and fixed by a competent US administration probably
in days, but three years later, these two countries, Saudi Arabia
and Qatar, still aren't talking, largely because we did nothing to
fix it."

I hear politicians say really stupid things all the time, but this is
about the stupidest thing I've heard a politician say recently -- and
that's saying a lot.

He's referring to a major split in the Gulf Cooperation Council (GCC)
that occurred on March 1, 2014, when Saudi Arabia, the United Arab
Emirates (UAE) and Bahrain recalled their ambassadors from Qatar, and
then on June 5, 2017, when the same four Arab countries imposed a
land, sea and air blockade on Qatar.

I've written about this subject many times, and how it's based deep in
the history of the countries involved, going back to the collapse of
the Ottoman Empire.

So we can infer the following from Chris Murphy's statement:


This goes beyond simple ignorance. Someone who has been in Congress
since 2007 and is on the Foreign Relations Committee should at least
know that he doesn't know what he's talking about, and should have the
common sense to keep quiet. This goes we'll beyond ignorance into
sheer stupidity.

Qatar-based Al-Jazeera ran this video without comment. They must have
run it to show the world how stupid the Americans are.

And it isn't just Democrats. Lindsey Graham has been saying some
really dump things about the Syria situation that I won't go into
here. Of course, almost all other politicians could be said to be
competing with one another to say the stupidest possible thing.

In 2006, the Congressional Quarterly and the London Times conducted a
survey of Mideast experts (Democrats and Republicans), and found that
they couldn't answer simple questions like whether al-Qaeda was a
Sunni or Shia organization. (As I recall, most thought they were
Shia.)

You know, I really do despair that the country is being run by total
idiots. And the "experts" in China are also idiots. But this is why
we're headed for World War III.
Top
Post Reply
2370 posts