S&P 500 earnings were pretty flat for the 2 years before the coronavirus hit. Let's say the S&P peaked at 2872 before earnings flattened out and earnings get back up to about $34 per quarter as they were in 2018 and 2019, then somehow resume growing.

What could cause further multiple expansion justifying a price above 3500 would probably be that interest rates stay right where they are for 10 years (very low but not below zero), buybacks remain strong for another 10 years as companies borrow even more at low interest rates to buy back even more shares, and inflation stays between 1.5 and 2.5 percent for 10 years. For people to assume any of that will happen seems kind of nuts.
While the periphery breaks down rather slowly at first, the capital cities of the hegemon should collapse suddenly and violently.
Top

And I know that when I point to the low as reported earnings and estimates for 2020 that is a "right now" type of argument. But it does refute the idea that right now "there is nowhere else to go" but stocks because stocks aren't really earning anything right now.
While the periphery breaks down rather slowly at first, the capital cities of the hegemon should collapse suddenly and violently.
Top

The thing that I find most interesting about this statement is the
implication that before now you did know what's going on, which would
make you somewhat unique.

I don't see a time scale on this graph, but I assume that it's today,
and so that could be temporary euphoria from the signing ceremony for
the Israel-UAE-Bahrain peace deal. Or maybe it's because Kim
Kardashian said she would boycott facebook for one day. There are
lots of reasons.
Top

I don't see a time scale on this graph, but I assume that it's today,
and so that could be temporary euphoria from the signing ceremony for
the Israel-UAE-Bahrain peace deal. Or maybe it's because Kim
Kardashian said she would boycott facebook for one day. There are
lots of reasons.

It's people becoming super optimistic about Kamala Harris becoming president and that she will unite all Americans and Make America TRULY Greater Than It's Ever Been.
While the periphery breaks down rather slowly at first, the capital cities of the hegemon should collapse suddenly and violently.
Top

June 12, Youssef Al Otaiba, UAE’s ambassador to the United States, made history by publishing an op-ed in Hebrew in Israel’s largest newspaper, Yediot Ahronot Daily. In the article, Youssef warned against Israel Prime Minister Netanyahu’s annexation plan of the West Bank, and offered a possibility for improving relations between the two nations, stating: “With the region’s two most capable militaries, common concerns about terrorism and aggression, and a deep and long relationship with the United States, the UAE, and Israel could form closer and more effective security cooperation.”

August 13, 2020 will go down as one of the most significant days in world history, especially in the long history of the Middle East. This past Thursday, the world woke up to a joint announcement from the United States, Israel, and the United Arab Emirates, declaring Israel and the UAE would establish formal diplomatic ties.

four main points:
The PLO and the Palestinian Narrative was dreamt up by the KGB, which had a penchant for ‘liberation’ organizations.” — Ion Mihai Pacepa, former chief of the Foreign Intelligence Service of Romania.
“First, the KGB destroyed the official records of Arafat’s birth in Cairo, and replaced them with fictitious documents saying that he had been born in Jerusalem and was, therefore, a Palestinian by birth.” — Ion Mihai Pacepa.
“[T]he Islamic world was a waiting petri dish in which we could nurture a virulent strain of America-hatred, grown from the bacterium of Marxist-Leninist thought. Islamic anti-Semitism ran deep… We had only to keep repeating our themes — that the United States and Israel were ‘fascist, imperial-Zionist countries’ bankrolled by rich Jews.” — Yuri Andropov, former KGB chairman.
As early as 1965, the USSR had formally proposed in the UN a resolution that would condemn Zionism as colonialism and racism. Although the Soviets did not succeed in their first attempt, the UN turned out to be an overwhelmingly grateful recipient of Soviet bigotry and propaganda; in November 1975, Resolution 3379 condemning Zionism as “a form of racism and racial discrimination” was finally passed.
We know who picked up the baton.

Yet the prize goes to Arafat who in 1970, with candid simplicity, told the reporter Arianna Palazzi:
“The question of borders doesn’t interest us…

Kafirs will catch up.

JFK- Ride the tiger's back, end up in his belly...
"those who foolishly sought power by riding the back of the tiger ended up inside."
This metaphor shows Kennedy's feelings toward communist countries.

The body farm demsheviks have a bill to pay.

Snowflake went public today (SNOW). A month ago it was expecting around $80 a share. Right now it is at $271.
This gives a market cap of $75 Billion and a price to sales about 25.
Sure seems a bit frothy, the kind of thing you see around market tops...
Top

COVID biometric DNA based assassination management platform.
The fear mongering is to convince their peasants to hand over their DNA to private COVID corps,
a.k.a Rockefeller Gates Rothschild Eugenics psyop platform.
Top 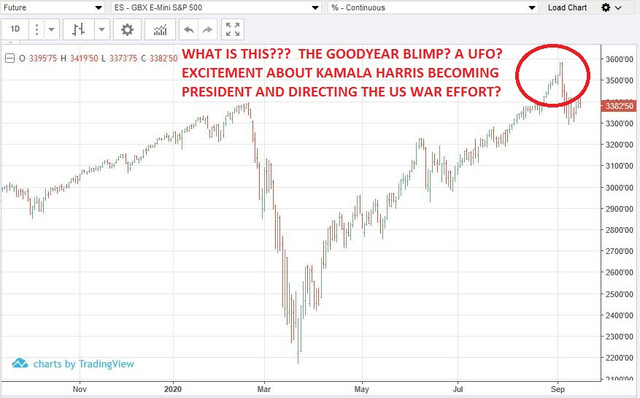 It seems like about half the US population is going to think the USA is a complete mess no matter which way the election goes.
To the point that lots of people won't feel safe or willing to take as much risk. Anyway, I have convinced myself that there will be
a big selloff before Jan 20 and my puts will do well.

Users browsing this forum: No registered users and 9 guests